The Eye With Which the Universe Beholds Itself - Ian Sales 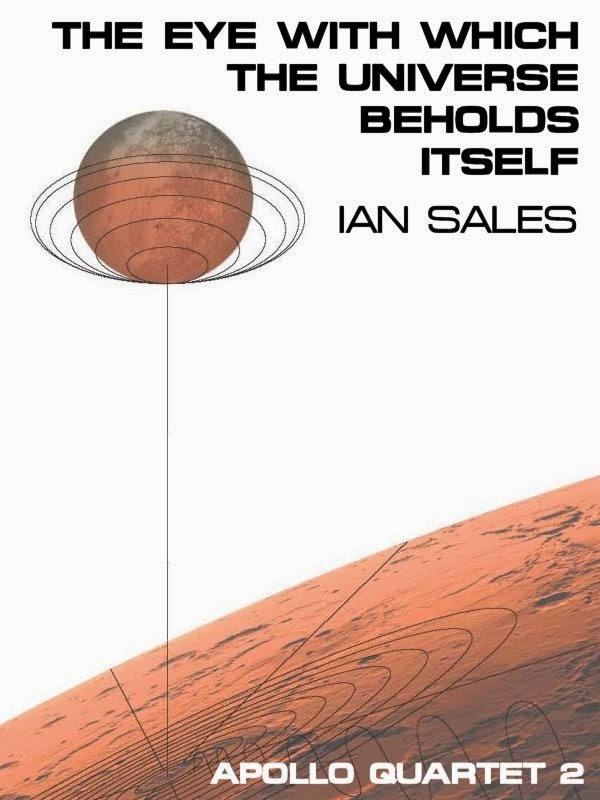 The Eye With Which the Universe Beholds Itself is the second part in Ian Sales' Apollo Quartet, a series of alternative histories rooted in the Apollo space program of the 1960s and 1970s. I'm a little behind on this series of novellas. The third one, Then Will the Great Ocean Wash Deep Above, has been out for quite a while but I haven't had a chance to read it yet. This is actually my second read of The Eye With Which the Universe Beholds Itself. I read it last year but didn't get around to writing a review then. This week I had a bit more reading time so I had another go at it. Like the first in the series, Adrift on a Sea of Rains, it is a highly technical piece of science fiction. If you liked the first one in the series, this one is sure to go down well too.

The US has missed its opportunity to get an astronaut to the moon first. The Russians beat them to it and NASA shifts its objective to an even greater prize: a manned mission to Mars. In 1979, Major Bradley Emerson is the first to set foot on the red planet. Soon after his return, he retires from NASA, something that probably saves his marriage. Something he found on Mars keeps him tied to the space program however, and in 1999 he is asked to go back into space for a final mission.

The story contains so many references to real events, places and science that finding where the story deviates from our own history is quite a challenge. Sales refers to the Apollo missions of course, in an appendix in the back a list of the missions and how they played out in this timeline is added. There are also references to the 'face' on Mars, photographed by Viking 1 in 1976, some quantum mechanics, including that infamous cat of Schrödinger and of course a number of references to the mysterious Area 51. Where the first novella seems to deal with the Nazi legacy to the space program, this novella is more focused on the conspiracy theories it has spawned.

Stylistically the novella is much the same as Adrift on a Sea of Rains. Sales uses no quotation marks in his dialogue, uses a table to display conversations over radio and generally creates a sense of distance to the characters. Like the main character in the previous novella, Elliott is lonely. It's fitting in a way as he knows something very few people on the planet know and he is not allowed to share it even with the people closest to him. Maybe it is not surprising then that Elliott feels at ease when he's in space.

The structure of the novella is quite interesting. He starts the novella with a list of acronyms, which the reader will want to return to frequently. Some of the novella is absolutely riddled with them. After that follows the main story, which is divided in two main strands. The first set in 1979 dealing with the journey to Mars and one set in 1999, dealing with Elliott's return to space. After that a glossary on important terms and space missions follows. Like with the previous volume, this glossary is required reading if you want to understand where Sales deviates from history as we know it. For the reader who has read though all that, at the very end a section with the answer to the riddle Elliott encounters on his second mission is included.

This odd structure gives the novella two endings as it were. Elliott's personal story has come to an emotionally satisfying conclusion before the glossary. One could even stop reading there as it is a natural end in the plot. It is quite open ended though. For the reader who wants to know what Sales makes of all the conspiracy theories he mentions it would probably have been unsatisfying. Those readers will want to go on and read the rest even if, for the readers more interested in the emotional climax of the story, it might feel like an afterthought.

Like Adrift on a Sea of Rains, The Eye With Which the Universe Beholds Itself is a very interesting piece of science fiction. It is very technical, very well researched and contains a lot of interesting detail for people with an interest in the history of space exploration. I found it amazing how Sales can take a work that is so obviously grounded in real technology and history in such a strange direction. It may not be the most action-packed piece of fiction you'll ever read but it certainly inspired a sense of wonder in me that much science fiction aspires to. In short, another novella well worth reading. I should get on with it and read the third one soon.