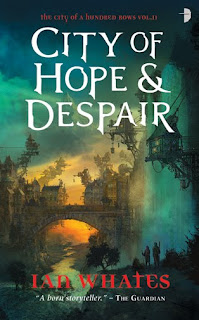 Publisher Angry Robot was kind enough to send me a review copy of Ian Whates' novel City of Hope & Despair a few weeks back. When I requested it, I somehow failed to notice this is in fact the second volume in The City of a Hundred Rows. Fortunately there are such marvellous things as online book stores so I hurriedly ordered a copy of City of Dreams & Nightmare and managed to read it in time to at least do a somewhat timely review of the second volume. I thought The City of Hope and Despair an entertaining if not particularly challenging novel. Although the story in the second volume branches out a bit, my feelings about the series are more or less unchanged.

Events in the first novel have left The Prime Master of Thaiburly with the uncomfortable feeling that he has failed to uproot the most dangerous player in the recent attempt to take over the City Below. He feels the city is still in danger. The Prime Master is not a man who became the leader of the city of Thaiburley by closing his eyes for signs like these. At some basic level the city is still in mortal peril. He sends the street thief Tom on the road with a number of unlikely companions to find the source of the city's power, the goddess Thaiss. The trip will open Tom's eyes to the wider world.

While Tom is exploring the countryside, Kat faces an entirely different set of challenges. A creature preying on the people sensitive to the goddess Thaiss' power roams the city, killing and feeding at will. Kat and the Tattooed Men mean to stop this creature but it is hard to track down, even for a team as confident, dedicated and talented as the Tattooed Men. To make matter worse, some parties in the city would rather not have Kat and her companions succeed. And then there is the troubled relationship between Kat and her sister, which seems to be heading for an inevitable showdown. The City Below is still far from safe for Kat.

Where City of Dreams & Nightmare was more or less self-contained, with all important story lines converging at the end of the novel, this second volume is a different creature. Tom and Kat's path diverges in this story, with Tom being cast into the wider world, exploring the area upriver from the city of Thaiburly. It's a strange experience for the boy who has never left the city, he definitely gains a deeper understanding of the world around him. What I found more interesting is Tom's confrontation with various aspects of religion. Tom is not religious, disillusioned as he is by his hard youth being forced to make a living through petty theft. Being in the presence of a young, devoutly religious priestess who regularly demonstrates her talent for healing using the goddess' power, tests Tom's conviction. On the other hand, he is not spared the greed and lust for power that corrupts some religious institutions either.

As a whole I thought Tom was a bit of a passive character though. He's a gentle soul, not someone likely to take centre stage without a good shove in the right direction and a good shove is not something Whates provide very often. Quite a contrast to Kat, who is much more confident in her abilities to survive in the City Below. Although both story lines include a number of action scenes, Kat is often in the thick of it, while Tom depends on his trusted talent to hide him. Like in the last novel Tom needs to be put under severe pressure to uses his talent in different forms where Kat might be considered impulsive. I hope Tom's character will develop a bit more towards confidence. He strikes me as a terribly passive main character for a fantasy novel with a young protagonist struggling to explore his magical abilities.

The previous book was a little light on worldbuilding, which surprised me a little for a book that clearly aims to present a fantastical setting to the reader. Historical background information on the city was very scarce in the first book. A few of the pieces are beginning to fall into place in this book, something I expect will continue into the next volume as the impact of Tom's quest becomes clear. It's more a matter of adding to what we already know however, Whates is not spending more words on in than he did in the previous volume. Personally I still feel the world is a bit underdeveloped, he doesn't make the most of his steampunkish, more scientifically advanced society than one would find in most novels. If you prefer a fast paced story without too many embellishments this may be your book.

I wasn't terribly impressed with the first volume and I'm not blown away but this second book either. As I mentioned in the introduction, they are entertaining, tightly plotted novels but fairly light reading. The major difference between the two is that City of Hope & Despair is much more clearly part of a series. The end offer no clear resolution. One of the story lines ends a major cliffhanger and elsewhere in the novel lots of threads in the story are obviously going to continue into the next book. With the expanded scope of the story and hints of a far larger conflict than what we've seen thus far spread throughout the novel, there is something to look forward to in the third volume of The City of a Hundred Rows.