You may have been wondering where I've been in the last couple of months. Or, more likely, you may not have noticed my absence at all. My move to my new house did take a bit more out of me than I expected. Last week the final pieces of furniture were put together and right now, the place is more or less like I had in mind before the move. Which is not to say that it is done, a house is never done, but I should have more time to read again after Christmas. One of the last pieces of furniture to arrive was the new bookcase. 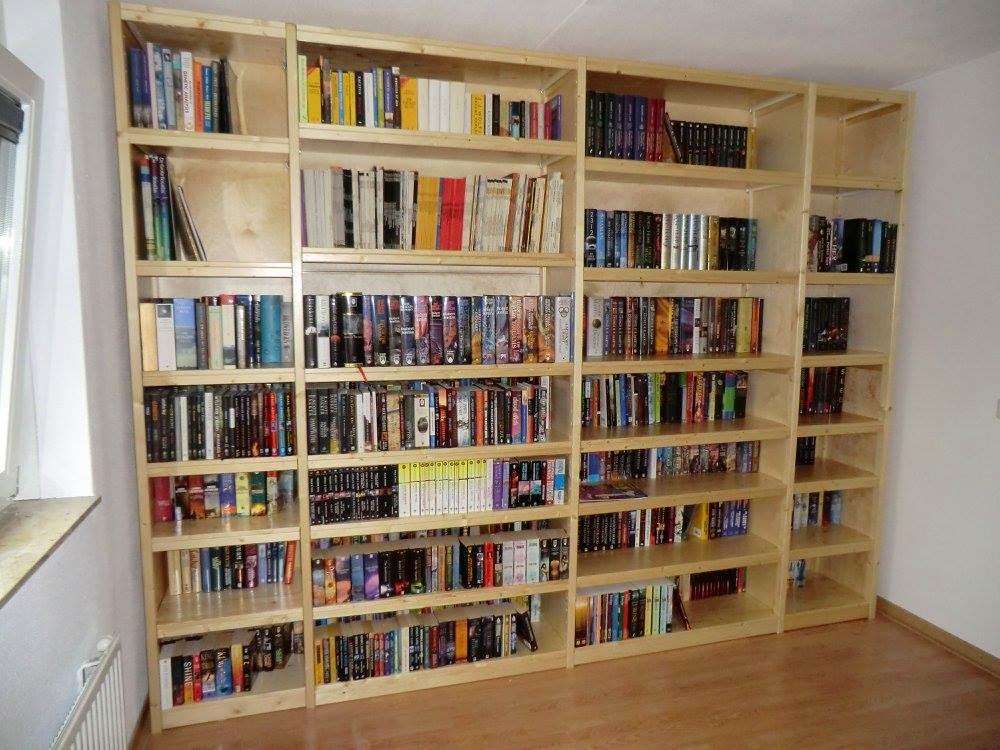 As you can see I have bought it with expansion in mind but I did shelve books double. Some space if also reserved for my girlfriend's books, most of which are still in Norway. All of this means there will be no more reviews this year but one thing I can manage is an end of year post.

Accounting
I've reviewed a rather meager 48 works this year, out of 49 works read. Which is a bit down from last year. According to Goodreads, these 49 works had a combined page count of 15,507, which is not all that much to put it mildly. Of these 39 were novels, 4 novellas, 3 short stories, 1 collection and 1 anthology. Had I been able to continue at the pace I've kept up for most of the year, I would probably have reached sixty so I'm making that the target for next year. Of these 48 works, 23 were written by women, 23 by men and the other two contained work by both men and women. It would seem I have more or less reached parity in that respect. I hope to keep it there next year too.

Just in case you are curious, the one book I didn't review was Een mooie jonge vrouw by Tommy Wieringa. It was this year's boekenweekgeschenk (the Dutch language readers will know what I mean.) It reminded me again why I read so little Dutch literature. Let's leave it at the book not being my cup of tea.

Random Comments had a bit of a novelty this year. My girlfriend has contributed 7 reviews to the blog, one of which was a joint review of a novel we've both read. That brings the total to 54 reviews. I hope to be able to run a few more of her reviews next year but she has made no promises so I won't either. Our reading only partially overlaps so her contributions would certainly add to the diversity on this blog.

Like last year, I'm going to limit myself to five although in terms of the number of excellent books read, 2014 was a good year indeed. I've read a lot of interesting books but these were the ones that stayed with me most (as usual in no particular order):

As I mentioned before, quite a few books fell just short of this list. There is Elizabeth Bear's finale of the Eternal Sky trilogy and Nicola Griffith's novel Slow River for instance. I liked Karen Lord's Redemption in Indigo a lot as well. Benjanun Sriduanghkaew's Scale-Bright is another highlight of the year although the whole doxxing affair that exploded right before I moved probably hasn't done her career any good. Last one I want to mention is The Apex Book of World SF 3, edited by Lavie Tidhar, which took a different direction than the previous two volumes but still contains lots of interesting stories from around the world.

Traffic
Traffic is down again this year, although not as much as last year. Unsurprisingly, November and December were particularly weak. Had I been able to keep going in those months I think I would more or less hit the level of 2013. Like last year, I've produced no big hits this year. Most of the top ten reviews are pretty close together. The top reviews are not surprising. A number of popular reviews have once again firmly panted themselves in the top 10 this year. The most popular reviews this year were:

The only 2014 review that made the list is The Waiting Stars, the rest are all pretty old. The Clan of the Cave Bear has been on the list since 2010 and titles like The Valley of the Horses, The Ice Dragon, The Lucky Strike and Sarum have made multiple appearances on this list. I am at a loss to explain Le Guin's sudden popularity as both of these reviews are quite old. Not quite sure what caused Willis' appearance on the list either. Lana's most viewed review is The Book of Skulls by Robert Silverberg. It comes in at #11.

Plans
I've given up on making plans for next year since I didn't really manage much of what I intended last year. The only thing I will say for certain is that I will start the year with an Alastair Reynolds review. This year it will be Blue Remembered Earth, which, if I am not mistaking, is residing under the Christmas tree in pretty paper at the moment. There are a few titles project that I want to finish this year but all of those are backlist titles of various authors. There's no rush getting those done. Other than that, I will try for sixty reviews. It should be manageable but we'll have to see how things go next year.

I wish you all happy holidays and all the best for 2015. See you around on the blog or elsewhere on the Internet next year!

Rob
Posted by Valashain at 13:17 No comments: