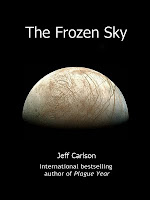 The Frozen Sky is a novella originally published in 2007 in the anthology Writers of the Furure XXIII. Last year, author Jeff Carlson has made it available as e-book and was kind enough to provide me with a review copy. Like the stories in his collection Long Eyes and Other Stories, which I read a few months back, The Frozen Sky is a hard science fiction story. It's a fine example of a well written novella, a length that in my opinion is very hard to get right. I have seen relatively few examples of novellas that aren't bloated short stories or rushed novels. In The Frozen Sky, Carlson strikes the right balance.

The story is set in the early 22nd century, a time when humanity is expanding throughout the solar system. Although the search for extraterrestrial life is ongoing, none has actually been found. Until a crawler from Jupiter's ice moon Europa, completely unexpected, stumbles across evidence for multi-cellular life. Quickly an expedition consisting of three scientists is assembled to investigate. When they arrive, they find themselves completely unprepared for what they discover.

Europa is one of the few places in the solar system that may harbour life. A process called tidal heating is theorized to make liquid water possibly under the thick sheet of ice that covers the entire surface of the moon. The existence of this ocean and the possibility of life have made Europa the subject of many science fiction stories. One in particular that comes to mind is 2010: Odyssey Two, by Arthur C. Clarke, in which a monster from the deep takes down an entire spaceship down with it. Another one I recently read is A Spy in Europa, a short story set in Alastair Reynolds' Revelation Space setting. In this story, Europa's oceans are settled by an advanced human civilizations. Clarke's portrayal of Europa's environment is a lot closer to what Carlson describes.

The novella is told in a non-linear fashion and contains two main story lines. In one, we find Alexis "Vonnie" Vonderach, the sole survivor of the expedition in terrible trouble, struggling to survive the challenges the moon throws at her. The second is set earlier and slowly reveals what went wrong. Carlson also uses this second story line to give the reader some background information on Europa and the history of space faring. It creates a very nice contrast between the immediate needs of Vonnie in the action packed and often frantic scenes in the first strand of the narrative and the slower, more scientifically oriented second strand.

Carlson creates some pretty fierce creatures in Europa's harsh environment. There may be a touch of the idea that such conditions drive the development of extreme physical and behavioural adaptations. An idea that frequently surfaces in the work of Frank Herbert for instance. I must admit the very thin atmosphere on Europa seems a big ecological challenge to overcome, but life sheltering in the ice, it may just be possible. The image of this huge dome of ice as the edge of the universe for these aliens is a nice one. It might feel a bit claustrophobic for humans though. Carlson's descriptions of the extremely cold ice caves Vonnie finds herself in certainly are.

Another thing Carlson gets right is the way he carefully avoids anthropomorphizing his aliens. Vonnie has serious trouble finding out the driving forces of their behaviour. If there is one area where the novella is perhaps a bit underdeveloped, it is in the understanding of what makes these aliens tick. When the penny does drop for Vonnie, it is the last piece she needs to reach an unexpected conclusion.

The Frozen Sky is a well written novella, looking for a reader not afraid of a generous helping of hard science fiction. As with many shorter pieces, some readers will feel it should have been longer and that is leaves a lot of the background of the story rather vague. Personally, I feel Carlson gets the level of detail right. It is after all, as much a story of Vonnie and how, despite the hostility she meets on Europa, she's still able to defeat the impulse to blindly strike back and realize what must be done instead. When Vonnie reaches that point, the background, fascinating as it may be, has served its purpose. To me at least,The Frozen Sky is a very satisfying first contact story. Recommended for hard science fiction fans in particular.