In January I wrote I was considering taking another reading Challenge on Worlds Without Ends. At the time I was considering the Translation one but coming up with enough titles that were translated and interested me enough to get a copy proved to be challenging. I will keep my eye out for them of course but I decided to pick an other challenge instead. Or rather, I picked two. 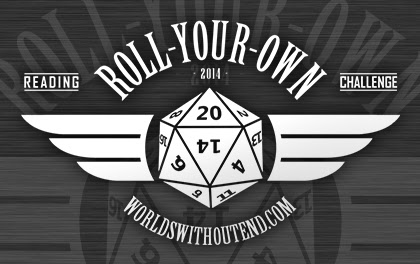 The first one is the 12 awards in 12 months challenge.


The WWEnd database tracks 14 different awards, which highlight some very excellent works of science fiction, fantasy, and horror.  The awards have different selection methods, and often seem to represent slightly different tastes.  This reading challenge involves reading and reviewing winning novels of twelve different awards.  The rules are as follows:


This one sounds like a good excuse to read some classics of the genre I have so far neglected as well as picking up some recent books that have made an impact. So far I am on schedule. I've already completed the following book:
Don't know which one I'll be using the Asimov one for yet.

The second challenge is the Book of Ones challenge. This one is a challenge that can make your reading list grow exponentially, I don't think I'll be picking it again.


Read 12 books that begin a series, and review 6 of them. It doesn't necessarily have to be the book identified as the first in the WWE database, but should be a recognised starting point not just a random book. In addition, it should be a real series, where the books relate to one another, rather than a loose collection of stories or a thematic series (so Ursula Le Guin's Earthsea, fine; Hainish Cycle, not so fine).

I'm also on schedule for this one. It actually allowed me to use one book twice. So far I've read:

So far so good.Should make it comfortably this year.
Posted by Valashain at 06:00