Aliette de Bodard's Xuya alternative history is a fascinating project. One that I have returned to regularly on the blog. It's been three and a half years since I did one of these posts however, and since I did mention I might do a third, I guess it is past time. Especially since I got hold of a few of the harder to find pieces recently. I once again picked a pair of contrasting stories. Should there be a part four (you never know) this is going to be a bit harder to keep up. I have exhausted the stories set in the recent past in the Mexica Empire. 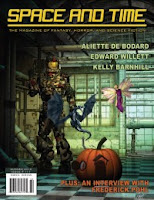 This story originally appeared in Space and Time Magazine #111, the Summer 2010 issue. Until De Bodard made it available in Ships in Exile, a collection put together as a reward for a fund-raiser, it hadn't been published anywhere else. The story may be hard to track down. It is a novelette, with a word count of approximately 10,000. As the title suggests, this story is set in the Mexica Empire. According to De Bodard's timeline the events take place in 1990.

The Mexica Empire is in turmoil as the weak Revered Speaker tries to consolidate power by crushing any opposition. In a Tenochtitlan with checkpoints and barricades at every turn and priests and Jaguar Knights enforcing loyalty to the regime, life is slowly becoming unbearable for the main character Necahal. When Palli,  a member of her extended family, asks for her help to cross the border into Xuya, she agrees to come with him. It will be a dangerous journey but before she can ask herself how well she actually knows this man, she is in way over her head.

The story is set some years after The Jaguar House, in Shadow, and shows us a glimpse of how the conflict has developed in the mean time. Stylistically The Jaguar House, in Shadow is a bit more refined. Fleeing Tezcatlipoca, is told in a more straightforward fashion. If not for the alternative timeline you could almost see it as a thriller. There are certainly possibilities for one in this setting. I don't feel this story is the best De Bodard has produced. It lacks something of the grace of her other stories. I do like Necahal though. She does something drastic and clearly hasn't thought it through properly, but she does face the consequences of her actions. I don't doubt she landed on her feet.

Three Cups of Grief, by Starlight

De Bodard recently won the BSFA award for this story. It was published in Clarkesworld 100, January 2015 and can still be read for free on their site. This story takes us into the future a century or two. The story is set on a different planet in a corner of the universe where a space faring Chinese/Vietnamese culture has established itself. It touches upon the concept of Minds, AIs with a biological core brain capable of piloting spacecraft, found in several other Xuya stories as well.  That sounds like space opera but the story is actually very intimate. Grief is a clear theme but in a way, so is identity. And tea, there is lots of tea.

A son, a daughter/Mind and a colleague are faced with the loss of eminent scientist Professor Duy Uyen. Because of the value of her work, the Empress goes against tradition and decides to give her memory implant to the colleague instead of her son, to make sure her unique knowledge won't be lost. Each of the three will now have to deal with their loss in a way none of them expected.

Three characters. One wants the implants but doesn't get them, one gets them but doesn't want them and the third comes to realize she doesn't need them. Family and honouring your ancestors is important in the culture De Bodard portrays, which makes the decision of the Empress controversial. One of the characters explores what it is to lose a mother and have what he thought was left of her taken away as well. Another deals with having a supervisor look over her shoulder from the grave. The third has to face up to the fact that she will never experience loss the way her family does.

The role of technology in the story is also very well done. The implants have been completely incorporated in the culture of the main characters. It offers possibilities they wouldn't have had otherwise but also raises new dilemmas. Readers agreeing with Theodore Sturgeon's definition of science fiction will approve of this story.

Two very different stories. I think they are about as far apart as you can find them in the Xuya universe. I still haven't read them all though. I guess I should get on with that. The more of these stories I read, the more this alternative history fascinates me.
Posted by Valashain at 13:24