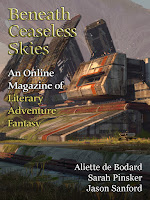 A Salvaging of Ghosts is a story in Aliette de Bodard's Xuya alternative history. I've been reading bits and pieces over this series of the past few years. So far none of the published stories exceeds novella length and they have not been collected thus far. It would take a bit of doing to round them all up. On the bright side, quite a lot of them are available to read online in various places. A Salvaging of Ghosts is one of the more recent ones. It appeared in Beneath Ceaseless Skies #195, March 2016 and can still be read on their site.

Thuy is a woman working as a salvager on the Mindship The Azure Serpent. Her job is to salvage valuable bits of spaceships lost in deep space. It is a dangerous job. All the salvagers, or divers as they think of it, expect to one day not return from a trip into space. Which is exactly what happened to Thuy's daughter. Now, Thuy's ship is in the area again where she was lost. It is most likely the only chance Thuy will ever get to salvage her daughter's remains.

Xuya stories come in roughly three different settings. There are the ones set in the Aztec Empire, which has survived until present day. De Bodard seems to have stopped writing those after 2010. A shame, the stories hint at a lot of interesting politics that never really get explored. The second group is set in the space age and deals with Mindships. Most of these stories have Chinese and Vietnamese characters. A third group is also set in the future and deals with sentient space stations, usually occupied by a future Dai Viet empire. This story falls in the second group.

It is essentially a story about loss and grief, and that makes it a very sad, melancholic read. There is a quiet desperation about Thuy. It feels like she is carrying out of a sense of duty rather than a will to live. Someone asked me this morning what my favourite line was in the work I was reading at the moment, I came up with this one:


Thuy would pray to her ancestors—to her mothers the Long Breathers—if only she knew what to ask for.

The quote also highlights another feature of this story and many others in the Xuya setting. Family is important for Thuy, both her living relatives and the deceased ones. In the end it is what motivates her to go out again and put the ghost of her daughter to rest. In the process, we learn something new about the Minds as well. A Salvaging of Ghosts is a beautifully sad bit of Xuya future history. I really wish some publisher would take the plunge and collect these stories.