The Brains of Rats - Michael Blumlein

This is a review of the short story that originally appeared in Interzone in 1986, the same title was later used for a collection, which came out in 1990. The story is included in the enormous anthology The Big Book of Science Fiction (2016), edited by Ann and Jeff VanderMeer, which is where I read it. The story is available to read online at Lightspeed, which published in in the March 2015 issue. It is one of those stories that are hard to categorize. It was nominated for the World Fantasy Award for instance, but some people also think of it as horror. Perhaps that last label is most fitting. The Brains of Rats is a very unsettling tale.

The main character is a doctor and researcher who has the means to influence the gender of unborn children. He could, should he want to, make sure all newborns are male or female. As he thinks over the possibilities this creates, his thoughts touch on genetics, human sexuality, cultural practices and a number of patients he has seen over the course of his career. None of which brings him closer to the answer of how to proceed.

Society has told us for many centuries that gender is binary. You are considered male or female, and raised within a set of rules your culture finds acceptable for your gender. For many people this approximation is comfortable enough, but it has been known for a long time that reality is more complex. In this story Blumlein describes how the genes that make us male or female have not changed much over the course of many million years of evolution, and that they are in fact nearly identical to those of species removed from us by millions of years of evolution. What has changed, so Blumlein tells us, is our brain. Many layers of cognitive development overlay the primitive core that determines sexuality. 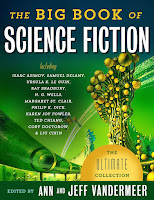 The main character feels this rapid evolution of our brain muddies the waters. In his mind, what we think and what society tells us about sexuality and gender is at odds with how the brain functions. The main character sees the divide in our brain reflected in various forms of violence. Ranging from spousal abuse, to  gender equality and the treatment of gender queer people, the story contains countless examples how poorly people treat each other. At one point I felt the main character undercut himself a bit by referring to the myth of the 9th century female pope. Although it has been discredited by modern historians, the story was widely accepted as historical for many centuries, so maybe he has a point there too.

There are two elements of the story that make it somewhat creepy. The first is the way the main character brings up his four year old daughter and compares her innocence to what he sees in the world around him. He reflects on how, even at that age, society is already beginning to excerpt its influence. The other is the detached, analytic tone the main character employs. It is a first person narrative, but very little emotion, apart from a vague sense of confusion, seeps through. He is analysing most of the time, looking for the correct diagnosis, both for himself and the species as a whole, without quite finding one that fits completely. Although the main character is essentially passive throughout the story, his thoughts are most unsettling. The Brains of Rats will definitely make you reconsider your own convictions about  gender and sexuality.