The Masque of the Red Death - Edgar Allen Poe 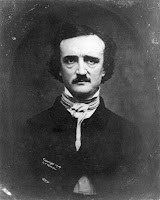 Last week I wrote about Dan Simmons' historical horror novel The Terror. It's based on the 1845 Franklin expedition to find the north-west passage which vanished into the Canadian Arctic. Simmons worked quite a few literary figures into this book, one of them being Edgar Allen Poe. In what is without a doubt one of the most interesting scenes of the novel, the crew of the two ships, frozen in the ice for two years now, organize a Carnivale. Using sailcloth and paint the rig up a series of tents on the ice to mimic to coloured rooms described in Poe's story The Masque of the Red Death. In defiance of the creature that haunts them, the cold, the crushing ice, the dwindling stores and the ever decreasing chance any of them will see home again the men throw one last party. Given their source of inspiration it is not altogether surprising it ends in tragedy.

Poe's original story was first published in 1842 and has been an inspiration for many authors and film-makers. I'm not at all familiar with Poe's work, my old English teacher approved of his work so naturally I avoided it. I guess my teenage rebellious streak has somewhat worn off in the last fifteen years. After reading the scene in The Terror I felt compelled to find the source. The Masque of the Red Death has been in the public domain for quite a while. A quick Google search turns up quite a few places where you can read it or download an e-book.

The Masque of the Red Death deals with a plague sweeping the land. To escape its horrors Prince Prospero and one thousand of his noble companions retreat to the abbey of the prince and seal themselves off from the outside world. Inside the abbey entertainment and provisions are available for an extended stay. Prospero entertains his guests in seven rooms he himself decorated. Six rooms are decorated and illuminated in one colour, while the seventh is a combination of black and blood-red. In this room, an ebony black clock chimes every hour, spreading a growing sense of unease among the guests.

I understand there is some debate about what Poe actually meant with his story. At first glance it appears to be a futile attempt to escape death, or perhaps reality. Simmons certainly seems to have interpreted it as such. One could also think Prospero and his companions got what they had coming abandoning the land the way they did. Poe does not really make it clear. The story leaves you with something to think about. I very much liked the way Poe builds the sense of horror in this story, rising from the descriptions of the abbey and the black room. The wrongness of the place is with you from the very first moment and gradually develops into full blown terror. An experience shared by Captain Crozier when inspecting what his men have made of the Carnivale or the ice.

Sometimes I think literature should be taught the other way around, starting with what young people actually read and working back to what influenced the writer. For a genre looked down upon by mainstream literature horror certainly has deep roots in the classics. Simmons' work is perhaps not the most accessible in genre fiction but I am quite sure that I would not have been so appreciative of Poe's story without Simmons' introduction. It's not the first time I've tracked back either. Last year Ian McDonald's Brasyl lured me into reading Joseph Conrad's Heart of Darkness. I guess this is one of the reasons why my to read list grown exponentially. Reading more Poe will have to wait for a bit though, maybe in a couple of months.