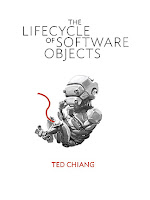 Ted Chiang is a remarkable author. He has only twelve published stories to his name, none of them exceeding The Lifecycle of Software Objects in length, in the space of twenty years. What's even more remarkable is that he's won an astonishing number of awards for them. Chaing is the winner of four Nebulas and three Hugos as well as a number of other awards. I would not be surprised if this novella ended up on the nominations lists next year as well. I've only read one story by Chiang, Exhalation, which is available online here in various formats. Exhalation is one of Chiang's award winners and deservedly so. Still, one story is not a solid basis for any kind of expectation so I was not quite sure what to expect.

The novella is inspired by a quote of Alan Turing, the man who invented the Turing test, an idea that frequently surfaces in science fiction. The quote itself is on the front flap, which should be read before starting the actual story. It puts the novella in a very different light. To quote from the front flap:

What's the best way to create artificial intelligence? In 1950, Alan Turing wrote, 'Many people think that a very abstract activity, like the playing of chess, would be best. It can also be maintained that it is best to provide the machine with the best sense organs that money can buy, and then teach it to understand and speak English. This process could follow the normal teaching of a child. Things would be pointed out and named, etc. Again I do not know what the right answer is, but I think both approaches should be tried.'

The second approach is what interests Chiang. In the novella the development of pieces of intelligent software named Digients, being raised by their human owners. The creators made sure they are docile and built in a lot of fail safes to prevent abuse but the Digients are able to learn and nobody knows exactly how far they'll develop. The Digients sell like hotcakes for a while but soon interest fades and new projects swallow the attention of companies and consumers. A small group of people, including some of the developers keep on taking care of their Digients for various reasons. None of them know how far they can take the development of these creatures.

Last week I reviewed another Subterranean publication and again I am very impressed with the looks of this book. Despite it's 150 pages, The Lifecycle of Software Objects is a novella length work. Part of the page count comes from the beautiful illustrations in the book created by Christian Pierce and Jacob McMurray. Some of them are depictions of robots in various states of (human) development, others are roadmaps linking components of behaviour and intelligence.

The first thing I thought when I finished the novella is why the hell isn't this a full novel? Chiang gives us a taste of a fascinating subject but he could have easily put a bit more flesh on the bones of this story. The Lifecycle of Software Objects covers about ten years in all and we make great jumps though the development of the Digients and their owners. The developments in wider society are covered briefly, there is barely a hint about the characters' pasts. The story is very focussed on the idea of creating artificial intelligence and letting it develop in an almost organic way. As such it reminded me very much of some of the older science fiction I've been reading, although I rarely come across a novel in which the central concept is so sophisticated.

The development of the Digients themselves is marvellously done in this novella. Early on in the story the Digients are toys to most people (Elizabeth Bear refers to the Tamagochi in her review on Tor.com), with only a small number realizing they can be more than that. Gradually the view changes from pets, to small children, to adolescents and finally... to adults? There are quite a few things in this novel that a parent would recognize. Chiang touches on issues like financial responsibility and even sexuality in a fairly direct way. At the same time, the Digients are not (digital) people. They have their own problems, limitations and challenges to deal with and since they are the first generation, dealing with them is often trail and error. There are many unknowns, including their legal status.

The Lifecycle of Software Objects is a very interesting little work. It raises a lot of questions for which no simple answers exist, as the ending of the novel clearly shows. Despite the brief descriptions of the various episodes in the development of the Digients I thought this novella a very interesting read. There is no doubt some people will be put off by the fact that it is such a focussed work. Even if it concentrates on the project of teaching software as you would a child, this book leaves the reader with plenty to think about. How much of the Digient's personality is due to the upbringing it receives and how much of it is simply programming? Does it matter that some of the characters form an emotional attachment to a piece of software? How sophisticated an intelligence does it have to be for that be be considered normal? At what point does the Digient become something more than a smart program? What are the consequences of that? The Lifecycle of Software Objects is a thoughtful tale and a peculiar one. I think it might be one of those love it or hate it stories. Personally, I loved it.