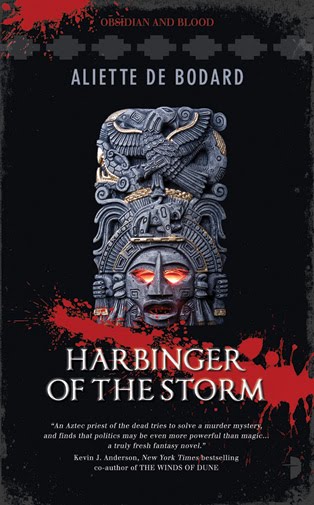 I read Servant of the Underworld, Aliette de Bodard's début novel and the first book in the Obsidian and Blood series, in January and it was one of the most interesting books I'd read in a while. Not that many people write a novel in a second language and manage to get it published. I'm always mildly envious of people with that kind of language skills. De Bodard's work (this is her second novel but there is lots of short fiction) usually features non-western cultures, something not that many writers take on, making Servant of the Underworld an unusual novel. I enjoyed her depiction of the pre-Columbian Mexica (Aztec) empire a lot. Harbinger of the Storm is the second book in the trilogy and thankfully publisher Angry Robot was kind enough to send me an advance copy. This book was high on the to read list for 2011.

Harbinger of the Storm is set about a year and a half after events in Servant of the Underworld. Worrisome events have taken place in the Mexica empire. The Revered Speaker, the link between the world of the living and the god Huitzilpochtli, their shield against the deities who are aiming to end the fifth world and make it anew, has passed away and left the people unprotected. Selecting a successor is no easy matter. The council from which a new Revered Speaker is to be elected is hopelessly divided. Time is pressing though, with each day that passes the pressure on the spiritual defences of the empire grows. The terrible star-demons are waiting for their chance to rip the empire apart.

Acatl, High-Priest for the Dead, once again finds himself caught up in the court intrigues he so much despises. Although most of the council members are aware of the treat to the empire and the need to restore their link with Huitzilpochtli, all of them are too busy expanding their personal influence to really care. To make the situation even more volatile a council member is murdered shortly after the Revered Speaker's death. Acatl is called in to investigate the death and finds out that someone is not ready to wait for the star demons to arrive. They summoned one to do their dirty work for them. The empire is in even more danger than Acatl assumed.

In the previous volume Acatl tries to stay clear of politics, something he does not entirely succeeds at. This time there is no escaping it. Serving Mictlantecuhtli, the Lord of Death, he has a part in the funeral ceremonies for the departed Revered Speaker. This makes Harbinger of the Storm a lot more political than Servant of the Underworld. De Bodard goes into quite a lot of detail on the downright Machiavellian politics some of the priests and military leaders of the empire practice. Some of the shameless manoeuvring by the priests who ought to be busy preventing a very real supernatural disaster is worthy of the Borgias. It thoroughly disgusts Acatl, who is... perhaps not entirely naive but a bit too unwilling to accept that not everybody will put the common good before their own interests.

The succession de Bodard describes is a very curious one. It often wasn't a father-to-son affair like one would expect. Often brothers and even cousins had a good shot at the position as well, making the succession uncertain. The author uses this to great effect in the novel, creating a struggle for the throne put under an immense pressure by the need to provide the empire with a link to their patron god. The peril the empire is in, is made very clear by the appearance of a number of supernatural beings, Aztec mythology does not seem to have a shortage of scary figures. Not everybody may like their historical fiction (or is it historical fantasy?) with this much supernatural influence but I think the author does use it cleverly to build the tension.

Servant of the Underworld was a bit more contained to the city of Tenochtitlan, with the city itself as historical background, not so much the characters and events. In this volume we get to see a bit more of the way what we think of as the Aztec Empire was organized. It mentions the alliance with the cities of Texcoco and Tlacopan and a lot more of the lay out of the city than the previous book. The departed Revered Speaker Axayacatl is a historical figure, as are a number of other characters in the novel. From what I can tell the historical details on the succession, or even the events in that particular year are not that well documented, giving de Bodard some leeway to tell her story. The book does not pretend to be fully historically accurate but it thought it was nice to see a bit more of the historical context.

The book is written from the first person and I think it restricted de Bodard a bit. The novel involves a lot of political intrigue, all of which we get to see from the point of view of a character neither particularly skilled nor very interested in the process. Acatl's pretty good at telling when he's being lied to but motivations often elude him. Some of the finer point of what is going on in Tenochtitlan's ruling council might have benefited from another point of view. That's a personal preference though, one could just as easily argue that since de Bodard started the story in the first person, she should stick with it.

I found Harbinger of the Storm to be a worthy successor to what I consider to be a very successful début. The emphasis in this book has shifted a bit from a murder mystery to political intrigue but the setting hasn't lost any of its appeal in the process. The novel zooms out a bit to allow room for more religious and political aspects of Aztec society to slip into the story. Despite my preoccupation with the historical aspects of the novel, Harbinger of the Storm is mostly a race against the clock to deflect a supernatural attempt to end the empire and the world. De Bodard manages to work a great sense of urgency into the story, making it a very fast read. She has once again managed to deliver a very interesting book. I'm looking forward to reading the third, as of yet unnamed, book in this series.