Now I don't normally do these kinds of posts because... well, normally there isn't anything in the mail I didn't order myself. But this week there is. A nice Christmas present by Tor containing the following books, both edited by George R.R. Martin: 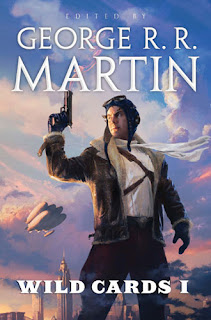 Back in print after a decade, expanded with new original material, this is the first volume of George R. R. Martin’s Wild cards shared-world series

There is a secret history of the world—a history in which an alien virus struck the Earth in the aftermath of World War II, endowing a handful of survivors with extraordinary powers. Some were called Aces—those with superhuman mental and physical abilities. Others were termed Jokers—cursed with bizarre mental or physical disabilities. Some turned their talents to the service of humanity. Others used their powers for evil. Wild Cards is their story.

I specifically expressed interest in this book so there will be a review as soon as I can manage, probably sometime next week. I've read the latest three Wild Cards books by Martin and his consortium last year and I as impressed with Inside Straight in particular good to see the first part of this long running series in print again. 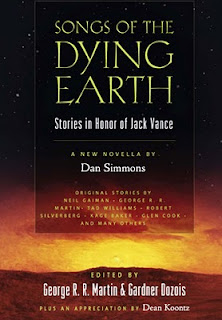 To honor the magnificent career of Jack Vance, one unparalleled in achievement and impact, George R.R. Martin and Gardner Dozois, with the full cooperation of Vance, his family, and his agents, have created a Jack Vance tribute anthology:Songs of the Dying Earth. The best of today's fantasy writers to return to the unique and evocative milieu of The Dying Earth, from which they and so many others have drawn so much inspiration, to create their own brand-new adventures in the world of Jack Vance’s greatest novel.

Half a century ago, Jack Vance created the world of the Dying Earth, and fantasy has never been the same. Now, for the first time ever, Jack has agreed to open this bizarre and darkly beautiful world to other fantasists, to play in as their very own. To say that other fantasy writers are excited by this prospect is a gross understatement; one has told us that he'd crawl through broken glass for the chance to write for the anthology, another that he'd gladly give up his right arm for the privilege. That's the kind of regard in which Jack Vance and The Dying Earth are held by generations of his peers.

This book came along with the Wild Cards one. I already own a the Subterranean edition and I must admit it has been gathering dust on the to read stack for a while now. Don't hold your breath for a review, I am not making promises regarding this one.
Posted by Valashain at 17:05