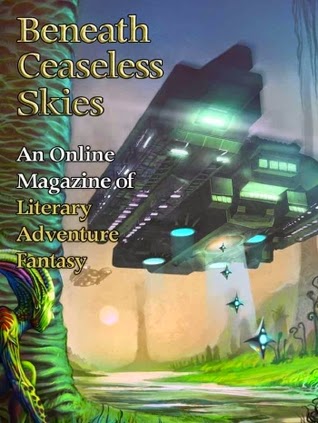 Aliette de Bodard has been producing a steady stream of outstanding short fiction in recent years. Her stories have won her several awards and have been nominated for for a whole bunch more. It should be no surprise that as the nominations for the upcoming awards season are trickling in, her name appears on the ballots again. This year, her story The Breath of War is on the shortlist for the Nebula Award in the short story category. The story first appeared in Beneath Ceaseless Skies #142 in March 2014, in a special Science-Fantasy edition. It can be read on their website for free. The author mentions it is 'sortof' set in her Xuya alternate history but it works as a standalone. In fact, it stands out a bit in the company of other Xuya stories.

In the aftermath of a war, a woman is making a difficult journey into the mountains. Her baby could be born any day now and before that happens, she needs to reach her destination. The journey is not going well though. Well short of reaching their goal, their aircar breaks down. What follows is a dangerous race against the clock. Along the way, the reason for the hazardous journey becomes clear.

I can see why De Bodard set is was 'sortof' part of the Xuya setting. It's the only story in the series where a supernatural element is included in the the plot. On the other hand it does include the Rong space faring civilization and references to the war I suspect we've seen form other corners of the universe in various stories as well. I guess The Breath of War is the odd one out but in a way it does fit in.

As far as I know it is the first time De Bodard mixes fantasy elements into what could be considered a science fiction story. It works very well on an emotional level but I do think that it leaves so much of the worldbuilding vague and uncertain that for the fantasy reader it can be a bit unsatisfying. The vague background of the is a problem I have with a lot of fantastical short fiction though. The reader is often asked to accept a lot of things as a given because the story simply isn't long enough to waste words on details. Sometimes it suffers because of it.  The Breath of War mostly escape this problem. It allows the reader to ignore that background of the planet's culture and the cause of the war by focusing on the character.

The main character Rechan is a woman who is facing the consequence of a choice she made during the planet's unique rite of passage. Rechan is something of a puzzle for the reader. There is a constant tension between choice and conviction and fate and inevitability. The choice she made more than a decade ago was influenced by the war taking away opportunities she feels she should have had. On the surface she is a rebellious teenager finding out the world is not always fair, doing something rash without thinking it through.

That being said, there is also the sense that her choice is not completely her own. The supernatural aspect of her rite of passage leaves the reader with the feeling that what happens is not entirely a conscious decision. Later on in her life, Rechan develops into a woman willing to go against tradition and social conventions and choose her own path, despite (or maybe because of?) longing for some parts of a traditional family life. Her unorthodox ways might have surfaced under other circumstances but you could also see this as inevitable given her past. The choice she makes as a teenager sets her apart, maybe even forces her to consider alternatives she might otherwise not have needed. The reader gets to make up their own mind about how to view Rechan.

De Bodard packs quite a lot of characterization into a 7000 word story. There is regret and loneliness in Rechan, but also resignation and hope. There is the feeling of a permanent goodbye and the start of something new. The Breath of War is an emotionally powerful story and an example that you don't need a novel to create a memorable character. Rechan is one of those characters that will stay with you for quire a while after finishing the story. It is another example of the excellent short fiction De Bodard is capable of creating. I've said it before and I will say it again, it is past time someone put a bunch of them together in a collection.