Going Away for a Bit

I've been a little preoccupied recently, mostly with my new job but also with an upcoming trip to Bergen in Norway. I'm flying there tomorrow and I'll be back on Sunday. I very much doubt I'll manage a review any time before late next week. I haven't exactly spoiled you in recent weeks, I'll try to do better next month.

So what's in store for next month? As you can see in the side bar I am currently rereading Kushiel's Avatar by Jacqueline Carey. Not making much progress but I will be spending a lot of time on trains, planes and buses in the coming few days so I may actually finish it before I get back. I'll also be writing a review for the Grand Master Reading Challenge over at WWEnd. This month I'll have a look at Forerunner by Andre Norton, which was recently reissued by Tor.


“Kuxortal has always been,” Forerunner begins. This ancient port was established in the time of antiquity and has built and rebuilt itself on the ruins of former civilizations. Kuxortal is inhabited by a lowly race of Burrowers, who tunnel and excavate beneath the city’s towers and sometimes discover artifacts from the past. Simsa is a Burrower who has spent her entire life in the service of an older, crippled mentor, Ferwar, who had reputedly rescued Simsa from a trash heap when she was an infant. Simsa, with her blue-black skin and platinum hair, clearly comes from different stock than the other Burrowers, but Ferwar never revealed her origin.

I've also accepted a few review copies. First up is The Night Sessions by Ken McLeod, which will be published in the US by Pyr. This copy was provided by the publisher.


A bishop is dead. As Detective Inspector Adam Ferguson picks through the rubble of the tiny church, he discovers that it was deliberately bombed. That it’s a terrorist act is soon beyond doubt. It’s been a long time since anyone saw anything like this. Terrorism is history.

After the Middle East wars and the rising sea levels, after Armageddon and the Flood, came the Great Rejection. The first Enlightenment separated church from state. The Second Enlightenment has separated religion from politics. In this enlightened age there’s no persecution, but the millions who still believe and worship are a marginal and mistrusted minority. Now someone is killing them.

At first, suspicion falls on atheists more militant than the secular authorities. But when the target list expands to include the godless, it becomes evident that something very old has risen from the ashes. Old and very, very dangerous. . .

From author Emily Devenport I accepted a review copy of the young adult fantasy novel Spirits Of Glory.


One morning, the people of the North woke up and the people of the South were gone. That’s the first thing every child learns on the colony world of Jigsaw. But for one girl, knowing about The Disappearance is not enough. Hawkeye wants to know why. Her curiosity won't let her refuse a journey to the Forbidden Cities, even though she's going into more danger than she can imagine.

A second novel received directly from the author is E.W. Scott's Dragon Touched.


The Eight Boulders Realm has found itself on the brink of civil war after the disappearance of the crown prince and the murder of his father, the king. Will the new king, Damon, be able to control the strong personalities that threaten the peace of the Realm for their own gain? Or will he be forced to go against his beliefs in order to protect his throne...and his life? Nolan and Mirabel Burnham, Duke and Duchess of Curiochta, are accustomed to keeping secrets from one another. However, when their eldest daughter, Wren, finds herself in the grip of powerful magic that she can neither understand or control they are forced to come to terms with the fact that some secrets are impossible to keep. Their family begins to tear apart, even as civil war threatens to destroy the entirety of the Eight Boulders Realm. 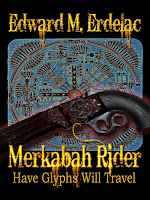 Last but not least is Edward M. Erdelac's weird west novel  Merkabah Rider: Have Glyphs Will Travel. This one has been on the to read stack for much too long.

The Rider and Kabede must rally a US Cavalry troop against an army of the undead lead by three of Adon’s renegade riders if they are to survive The Long Sabbath. The Rider infiltrates an Apache stronghold to convince the combined forces of Vittorio and Geronimo not to lend their might to the mysterious forces of The War Prophet. The Rider sets out to rescue the succubus Nehema from the wrath of The Mules of The Mazzikim, then confronts his greatest enemy, The Man Called Other. Seeking to learn the remaining secrets of The Hour of Incursion, the Rider and his companions arrive in Tombstone only to face the horror of The Fire King Triumphant.

In other words, I have some reading to do. What's on your to read list for next month?